Throughout history there have been, and continue to be many Indigenous heroes that have not been recognized by mainstream Canadian society due to views prevalent during the 1800s-1900s. From war heroes, famous cowboys, athletes, successful writers, artists, and many other successful Indigenous men, and women. The following activities are designed to shine a light on some of these heroes, some of whom have not been recognized for their success until after death. This connects to the idea of an “Elder in the Making”. Elders are people who are motivated to making their community better in the same way that we tend to consider heroes people who make our communities better.

Canada is home to many Indigenous heroes. Some of these influential people are athletes, musicians, war heroes, and politicians. Provided with this lesson plan is a list of highly recognized Indigenous heroes from Canada. Also included is a list of quotes, which talk about heroes and describe what kind of person a hero is.

A list of some influential Indigenous Peoples in Canada: 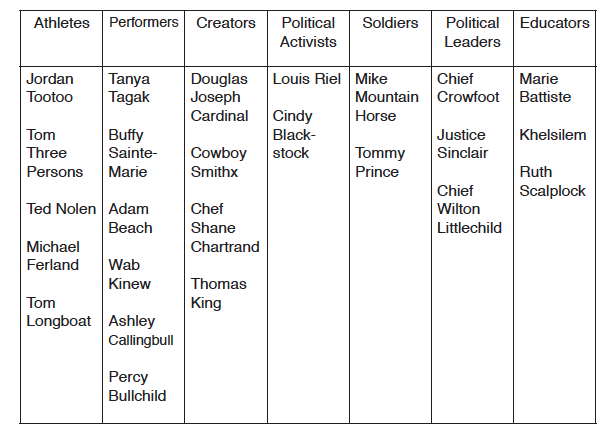 “A hero is someone who has given his or her life to something bigger than oneself.” – Joseph Campbell

“A hero is an ordinary individual who finds the strength to persevere and endure in spite of overwhelming obstacles.” – Christopher Reeve

“You have to do bad things in order to become a hero. You have to make sacrifices” – John Barrowman

“Heroes are made by the paths they choose, not the powers they are graced with” – Brodi Ashton, Everneath

“I would describe a hero as a person who has no fear of life, who can face life squarely.” – Alexander Lowen, Fear of Life.

“The real hero is always a hero by mistake; he dreams of being an honest coward like everybody else.” – Umberto Eco, “Why Are They Laughing in Those Cages?”, Travels in Hyperreality.

“To be a hero, you have to learn to be deviant, because you’re always going against the conformity of the group. Heroes are ordinary people whose social actions are extraordinary. Who act.” – Philip Zimbardo, TED Talk, Sept. 2008.

“The hero draws inspiration from the virtue of his ancestors.” – Johann Wolfgang Von Goethe

“In war the heroes always outnumber the soldiers ten to one.” – Henry Louis Mencken