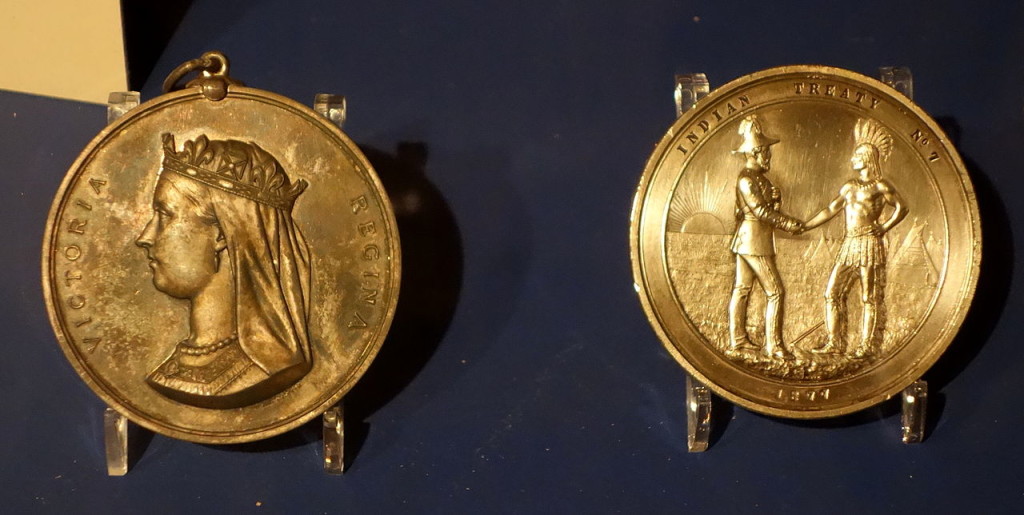 The Canadian Government had goals to settle and rule the vast area of the North-West which is now known as Western and Northern Canada. In 1874, nearly 300 recruits of the North West Mounted Police left fort Dufferin, Manitoba westward towards Southern Alberta, which was Treaty 7 territory occupied by the Blackfoot Confederacy, the Stoney Nakoda and the Tsuu T’ina peoples. Leading the men was James Farqueson Macleod, born on the Isle of Skye in Scotland. He was an assistant commissioner of the NWMP, along side him was journalist Henri Julien who travelled with them, documenting their westward trek.

Travelling with them as their interpreter was Jerry Potts, a half Blackfoot and half-Irish man. Jerry Potts was described as a skilled buffalo hunter, a trader and interpreter for the Blackfoot peoples. He was the man who arranged the meeting between the NWMP and Blackfoot leaders in 1874. Jerry led the men to a site along the Old Man River, which is now known as the city Fort Macleod. Jerry Potts helped keep the peace between the NWMP and the Blackfoot peoples, he was present during the signing of Treaty 7 as an interpreter.

Treaty 7 was described as a peace treaty between the Canadian Government and the Nations of Treaty 7. In 1877 leaders of the Niitsitapi, Tsuu T’ina, and Stoney Nakoda made treaty with the government of Canada negotiating the land of southern Alberta. The government’s intention was to acquire ownership of the land for the building of the Trans Canadian Pacific railroad and settlement. The Niitsitapi thought that they were agreeing to “live in a spirit of peace and mutual assistance with newcomers”. This was misinterpreted during the signing of the Treaty, as there were many promises that were said but not written and many things that were written and not agreed upon.
Chief Crowfoot, a Blackfoot warrior and skilled diplomat spoke on behalf of the chiefs, petitioning for a meeting with the British. For the British, the Blackfoot territory was the last barrier in connecting the railway, and a Treaty would have to be signed to secure passage and land. Through the perspective of the Indigenous peoples involved in the signing of Treaty 7, “Treaty 7 was primarily a peace treaty intended to facilitate a means of peaceful co-existence with the newcomers”.

The Treaty was intended to compensate the First Nations for the destruction of their primary economic resource and spiritual relationship with the buffalo. The Indigenous peoples were promised certain economic benefits, which would be provided by the Canadian Government.

In September of 1877 at Blackfoot Crossing, the Dominion would meet with the nations, which included the three bands the Stoney Nakoda, Tsuu T’ina, and the Blackfoot Confederacy, which consisted of the Piikani, Kainai, and Siksika. Lieutenant Colonel James Macleod and Commissioner David Laird represented the Crown.

In exchange for surrendering land to the Crown and obeying the laws, the ‘Indians’ were promised land reserves, hunting rights, yearly payment in perpetuity, farm implements and education. The pipe was smoked, ceremonies were performed, and medals and gifts were given to seal the treaty. Speeches were given by the Elders and Commissioners. Eventually the chiefs marked an X or touched a pen on the Treaty by their name, trusting Crowfoot’s judgement and trusting the Crown would live up to the promises made by Macleod.

It is unknown if Chief Crowfoot fully understood the repercussions of the Treaty at the time of the signing. To Crowfoot, the Treaty was simply an act of good faith between his people and the newcomers. He knew that nothing could stop the colonization and that whatever future his people and their survival, they would have to accommodate and work alongside the settlers.

In the years after the Treaty, it was known that Crowfoot had cause to regret his good opinion of the Canadian government. As the people of Treaty 7 suffered starvation and disease, as settlers continued to encroach on their land, the government failed to live up to the terms of the Treaty.

Many of the leaders from the nations in Treaty 7 did not speak or understand much English, and each Nation had their own language, which was distinct from the others. This made interpretation from English and between the nations incredibly difficult. Because of this, many of those who signed the Treaty were blind to it’s true intent.

Activity: My treaty = My rules

This is the document where the Blackfoot Confederacy and the Nations in Treaty 7 openly agreed to surrendering their land, wouldn’t it be hard to understand what you were agreeing to if you didn’t know English?

Divide the class into two groups, the first will represent the Crown and the second will represent The Blackfoot Confederacy and the Nations represented in Treaty 7. Have the Europeans write up a “treaty” in either their own made up language or a language other than English.

Then present the Treaty to the First Nations side, try to explain what is on the Treaty using your language and hand signals. Then have the Indigenous side try to explain what they made out of it and compare the two perceptions of the ‘treaty’. This will give students an understanding that the Nations involved in Treaty 7 weren’t fully aware of what they were signing to instead they used their faith on Chief Crowfoot to continue the signing of the Treaty.

Or to help the students better understand the concept of a Treaty, split the students into groups of two or three and have them come up with a treaty about something in the classroom, school, or playground. Then go through this difficult interpretation process at the end, and have them relate it back to what it would have been like at Treaty 7 and how much more serious the consequences were.